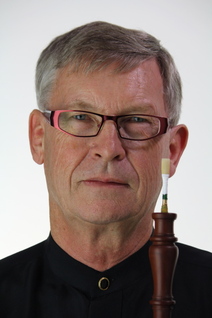 He has had a varied musical career, playing recorder, piano & bagpipes before turning to the oboe (/general.html). As a free-lance professional modern oboist (/modern-oboe.html) he was an orchestral player, chamber musician and concerto soloist, mainly in northern New Zealand and Queensland, balancing (often with some difficulty!) his musical commitments with a second career as a university professor.

He began playing baroque oboe in 1970 and it now his only instrument (/baroque-oboe.html) since an accident in 2009 forced him to stop playing modern oboe .

John is Mailing List Manager for Bach Musica NZ  (http://www.bachmusica.com), is on the Trust Board of the New Zealand Pops Orchestra (http://www.newzealandpops.co.nz/) and designs and produces CDs for both groups.  He is also a tennis racquet stringer for Rita Paczian Tennis (http://www.ritapacziantennis.com).