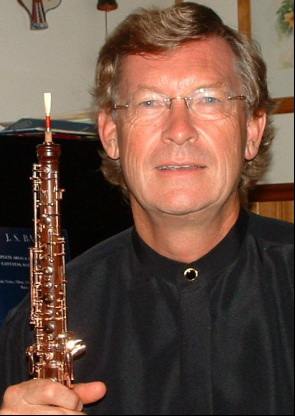 John has also performed frequently in recitals, chamber music ensembles and as concerto soloist, specialising in Baroque and Classical repertoire for solo oboe and oboe d'amore and attempting to achieve historically informed performances on modern instruments. As a chamber musician, he has performed throughout New Zealand’s North Island, as well as Australia & Germany, with pianists Cecilie McShane and Barry Barker, and with harpsichordists and organists Christopher Hainsworth and Rita Paczian. In the 1980s John founded and performed extensively with the Aulos Ensemble and Ludus, chamber groups specialising in trios, quartets and quintets utilising oboe, with strings/bassoon/horn and piano. Between 2004 and 2008 he performed throughout southern Queensland with the chamber ensemble Camerata Queensland. He has also been a member of various wind quintets, including New Zealand-based Eklekktika and the Hamilton (NZ) Wind Quintet.

Notable achievements as a concerto soloist have included NZ premieres of concertos by Vivaldi (RV 458) and Albinoni (Op 7, No 9) with the Opus Chamber Orchestra, the Heinichen Oboe d’amore Concerto with Bach Musica NZ, the reconstructed slow movement of Beethoven’s Oboe Concerto and the Australian premieres of Vivaldi’s Oboe Concerto in A Minor, RV 462, and the Heinichen Oboe d’amore Concerto  Other career successes have been performances of oboe concertos by Albinoni, Bach, Cimarosa, Marcello, Vivaldi, Haydn/Malzat, the Salieri Flute & Oboe concerto, the Bach Violin & Oboe concerto, the Mozart and Haydn Sinfonia Concertantes, double concertos by Albinoni (2 oboes) & Vivaldi (2 oboes & oboe/bassoon) and the Telemann triple concerto for Oboe d’amore, Flute and Violin. He is an experienced oboe and oboe d’amore soloist in Bach’s works and has performed many of the cantatas, and major passions (St John Passion, Mass in b minor and Christmas Oratorio, etc).